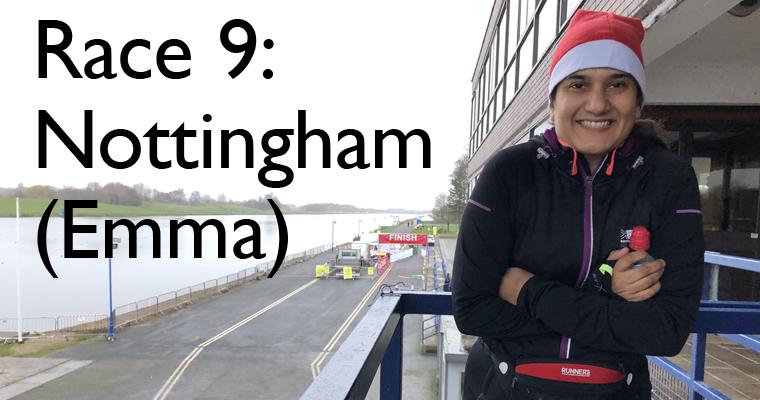 The Nottingham marathon marks the final race of 2018 before the Christmas break, but it’s not long until she will be back in action for race 10 in Milton Keynes on Saturday 5th January.

For the first time in the year-long challenge, Emma and Clint are taking part in different marathons for race nine.

“I was apprehensive when I woke on Saturday, as due to other commitments, Clint and I have had to split up this month so for the first time I was on my own for the start. Nottingham was chilly and grey with sharp and icy rain. I stood at the start line feeling very cold and nervous. Having said that, the atmosphere for this Christmas run was amazing, with everyone running in their Santa hats and the goody bags afterwards were in Christmas stockings. It felt very festive.

“It was a bit of a strange course: 8.75 laps around a rowing lake. Very flat, quite exposed and the only time I have ever been able to see the entire course whilst running round it. Unfortunately, the rain and biting wind stayed with us for most of the day.

“Two laps in, I met a lovely young lady called Carly who introduced me to “Jeffing” which means interval running for long distances, so 30 seconds run, 60 seconds walk and repeat all the way around. As she kept catching up with me as I ran, I decided to join her in this technique. Another lap round and we were joined by Lesley who decided to give it a try as well. At the half way point Carly sadly had to slow down and Lesley and I continued around, eventually finishing half an hour before her. We were feeling a bit bad about continuing without her, but then she told us she had run two marathons back to back the weekend before so we stopped feeling guilty and got on with our race.

“Jeffing was an epiphany for me as I somehow managed to complete the marathon 35 minutes faster than last month. I will try it again next month properly, from the start, and see if I can finally get around all 26.2 miles in under six hours!

“It was a lovely surprise to see Malcolm and Sharon Lindley at the start cheering me on. With no Clint this month, I wasn’t expecting to see anyone and I would like to thank them for taking the time to travel to Nottingham to be there. It makes a huge difference to have support. Thank you both for braving the miserable weather.”

Clint’s ninth race will be in Milton Keynes on Sunday 9th December. Stay tuned for Clint’s updates and sponsor his challenge here. 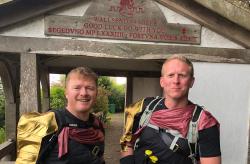 Roman across the country for charity
On Monday 16th September, Clint Nykamp and Jonathan Handford walked a coast to coast challenge, totalling 84 miles in 3 days, along the leng...
Read more >>
26th Sep 2019