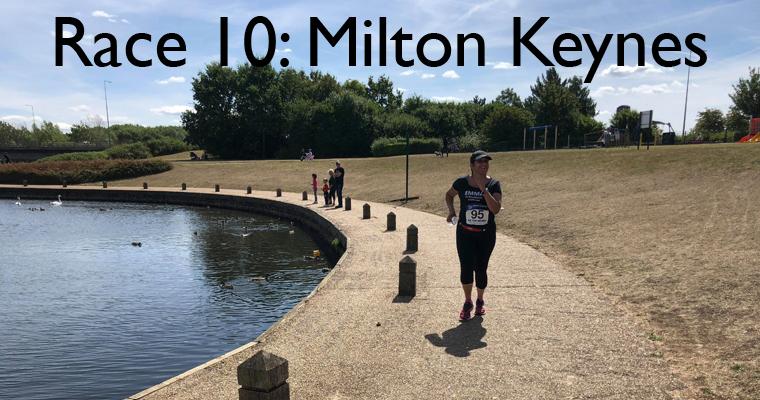 Emma Preston and Clint Nykamp kicked off the New Year with their 10th race in the 12 Marathons Challenge on Saturday 5th January.

This month, the pair ventured to Milton Keynes. This was Emma’s second time at the venue and Clint’s third visit. The calming lake, fairly flat course and frequent drinks stations along the lake circuit has made this one of their favourite locations.

While everyone was busy stuffing their faces and opening presents over the festive break, Clint and Emma continued to train for their marathons. The commitment involved in this year-long challenge is evident, as even bank holidays did not apply to their training schedules.

Congratulations Emma and Clint on an amazing achievement! They are so close to the end of the challenge, please support them by donating here.

Race time: 6 hours 17 minutes
Emma said: “Being back in Milton Keynes felt rather strange, although the conditions were much better than the heatwave we experienced for the fifth race in August. It was a bright, sunny day and the temperature was cool but not too cold. As I have experienced before, this is a very solitary race when you are at the back of the pack.

“The course was seven and a bit laps which means there was no need for Marshalls on the course: you follow the trail of flour at relevant points. This was one of the smaller races so I didn’t see many people as I ran round. The mental battle to keep myself moving became more of an internal war at some points.

“I gave ‘Jeffing’ another go. This was the technique I learned from a fellow runner for Race 9 in Nottingham. The idea is that you run quickly for 30 seconds and walk for 60 seconds, from start to finish. However, it turns out it is much harder to regulate your speed without a running-buddy. Having said that, I was going great guns until the final lap and managed to fend off being lapped by Clint, which was an improvement on last time! But, the final lap was much more difficult, which affected my time. Still, I think ‘Jeffing’ is worth persevering.

“I wasn’t last this time, with five finishers behind me. It was a huge motivational boost to know I was nine minutes faster than the last time I was here. It also felt great to know that was 10 marathons down, only two to go. The end is in sight!”

Race time: 5 hours 11 minutes
Clint said: “It was tough getting back into the swing of marathon running after the Christmas break. I carried on training throughout the festive period, but indulged a lot too. I wasn’t feeling great on the day thanks to the cold weather so the last two laps were a struggle.

“Despite this, I ran my personal best! I really enjoyed Milton Keynes, this was my third and final time at Milton Keynes. Thankfully, I wasn’t late this time.

“I am looking forward to the final two races. It feels very strange that after a year of training and races, the challenge is nearly over and we have raised nearly £6,000 for homelessness. I am hoping to beat my personal best for my last race in Walton-on-Thames in Surrey on 2nd March. It would be amazing to have lots of supporters cheering me on.”

The Penultimate Marathon: Race 11: Kidderminster, Worcestershire
After possibly the longest year of their lives, Emma Preston and Clint Nykamp’s 12 Marathons Challenge is drawing to a close. The pair...
Read more >>
19th Feb 2019